“My interactive installations have evolved from studies in both psychology and engineering. Inspired by the Sputnik “menace” I started college at Carnegie Tech but by my 20’s, I had drifted into Social Psychology and received a Masters from the Univ. of Wisconsin, Madison. I became less enamored of an academic career during the student unrest of the late 1960’s and by 1970 I was surprised and seduced by the potential for discovery I found in making art. I have been using art to answer questions ever since.

Since the early 1980s, my installations have been shown in the San Francisco Bay Area, Los Angeles, Florida, China, and Europe. “…and the Synapse Sweetly Singing”, “Etiology of Innocence”, “A Theory of Entanglement” and other large installations were featured at FACT, Liverpool, UK and v2 in Rotterdam in 2009, and “Party of the First Part” was shown in Paris, France in 2012. Awards include a Guggenheim Artists Fellowship in 2011, an Adolph & Esther Gottlieb artist grant in 2009, a Pollack Krasner Foundation Grant in 2002 and “Conservation of Intimacy” won an Interactive Art Award of Distinction from Ars Electronica in 2007.

My work examines contemporary issues using early technologies to highlight the wonderful absurdity of how our understandings are mediated by our technology; “…and the Synapse Sweetly Singing” is a spring and tin can telephone model of the brain that invites you to crank yourself into a pine coffin to communicate with those left outside. Other pieces include a stone age digital computer, a rainstorm of chaos and nostalgia, a simulation of being lost and adrift on a black plastic ocean at night, and a phone booth-confessional network.

A favorite technology is Étienne Jules Marey’s 1874 pneumatic physiologies. “Etiology of Innocence,” takes two people to complete a pneumatic heart simulation. And, much as Marey monitored the economies of bodily activity, “Conservation of Intimacy” applies 19th century imaging to trace intimacy’s mechanical nature. The title suggests that, If there are laws to govern the human universe, intimacy may well be fundamental.

My mechanical vocabulary, analogous to our social interactions, provokes cooperative games. For example, “A Theory of Entanglement” is a giant knitting machine requiring accommodation, cooperation and contingent activity to produce the knitting — commenting on both Capitalism and Quantum Physics. “Party of the First Part” and it’s 2014 sequel use differential gears to combine the efforts of participants so that nothing gets done, much like the US Congress. ”Aspirations,” allows two people to negotiate how much air to keep for themselves and how much to share with their partner and “Double Doubt” (2022) physically tests participants balance as they explore cooperative and competitive strategies.” 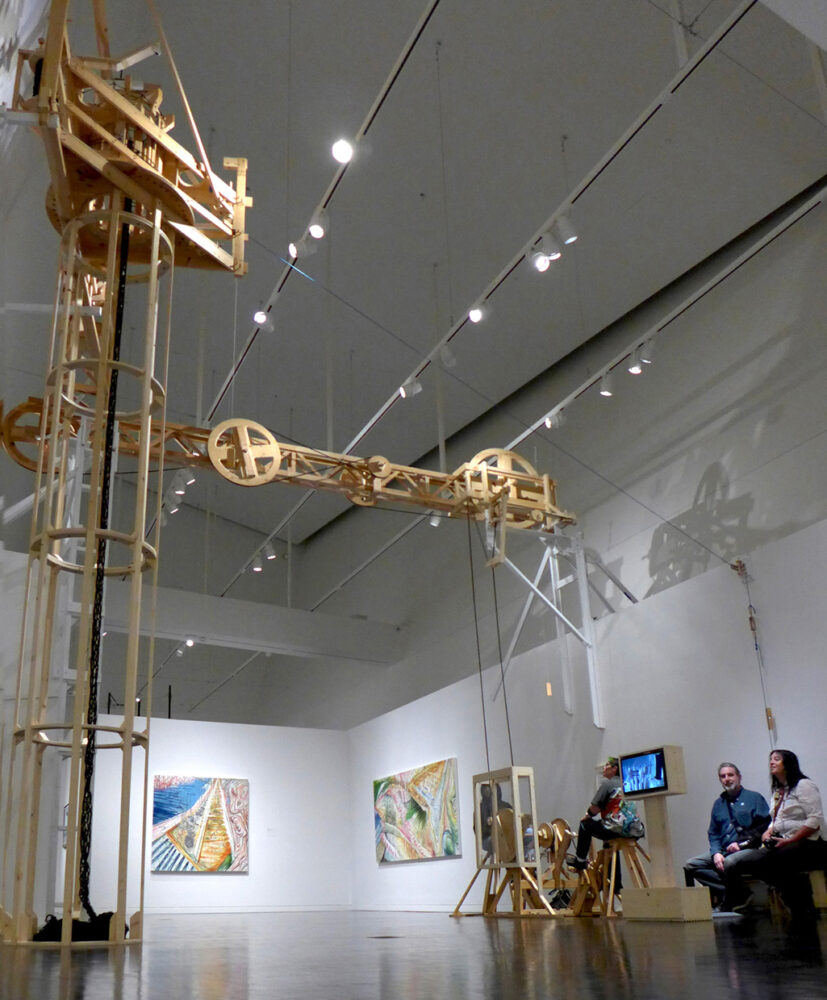 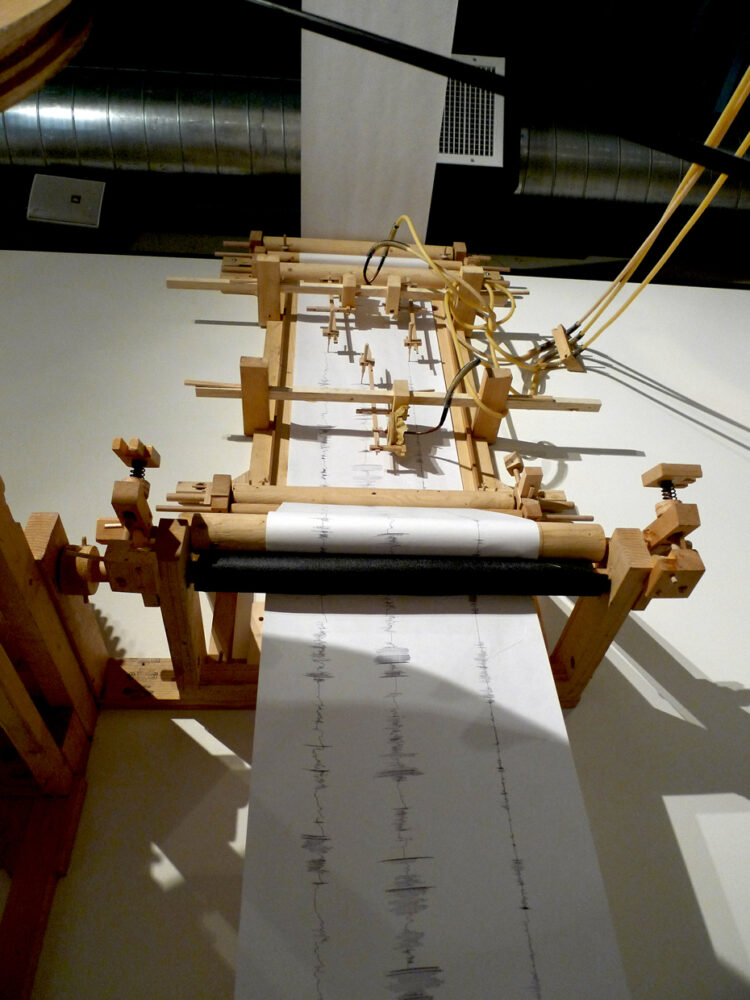 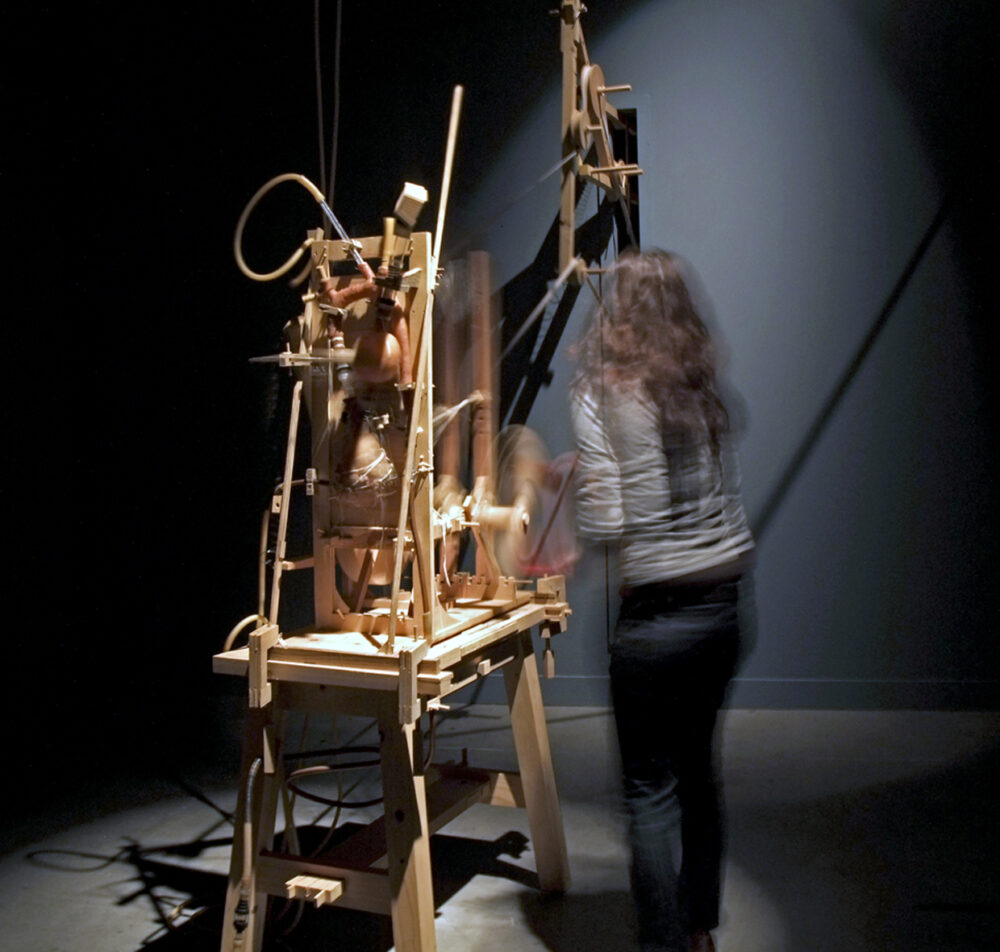 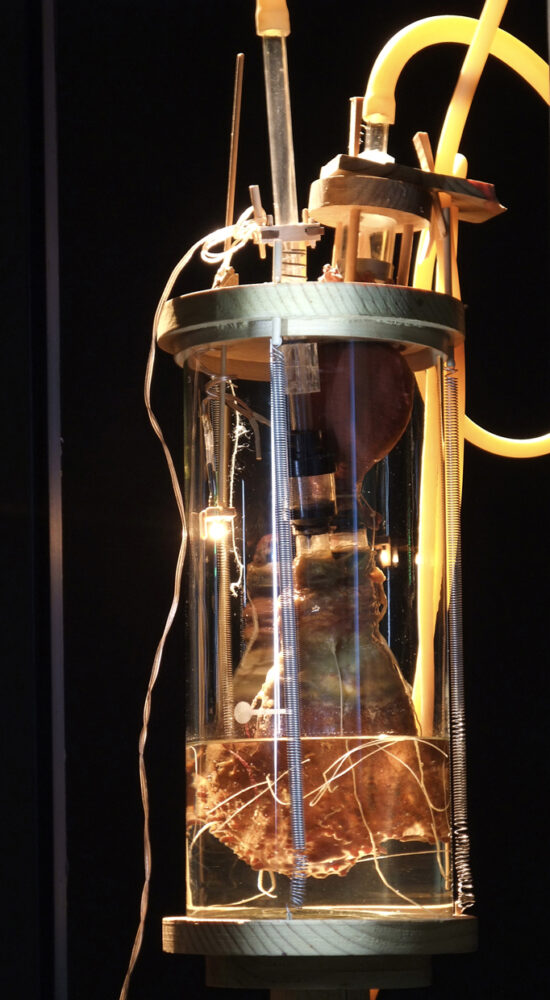 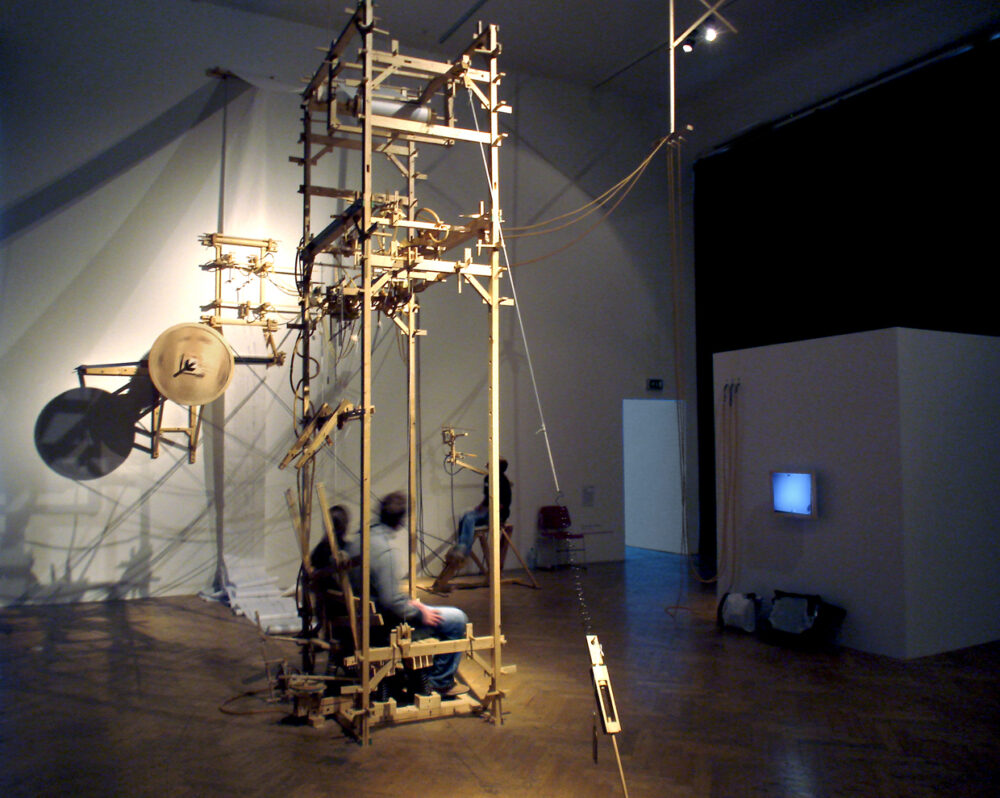 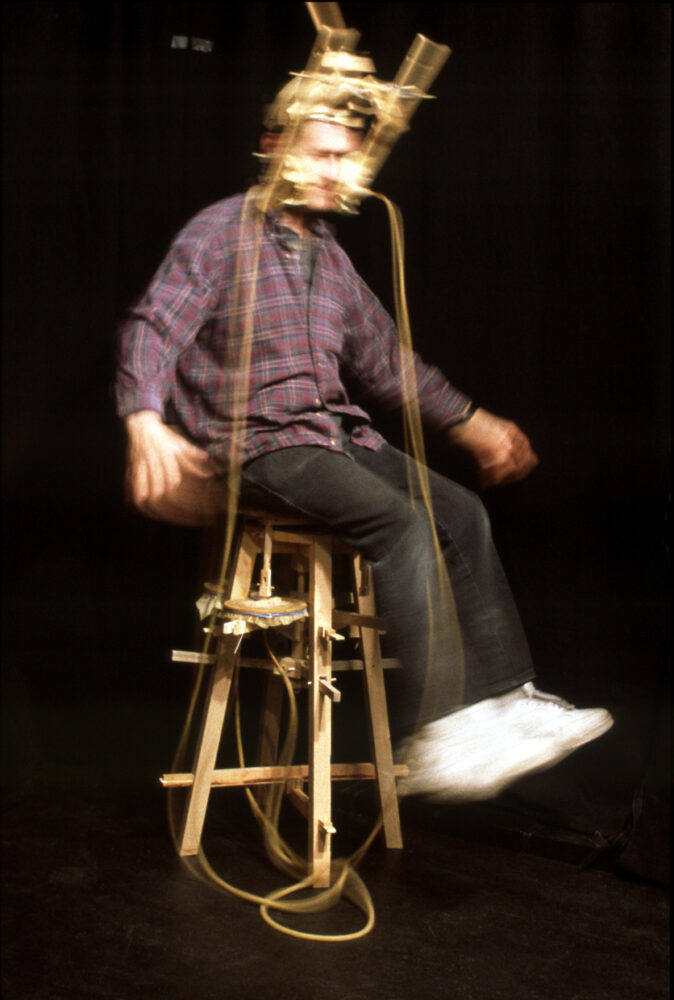 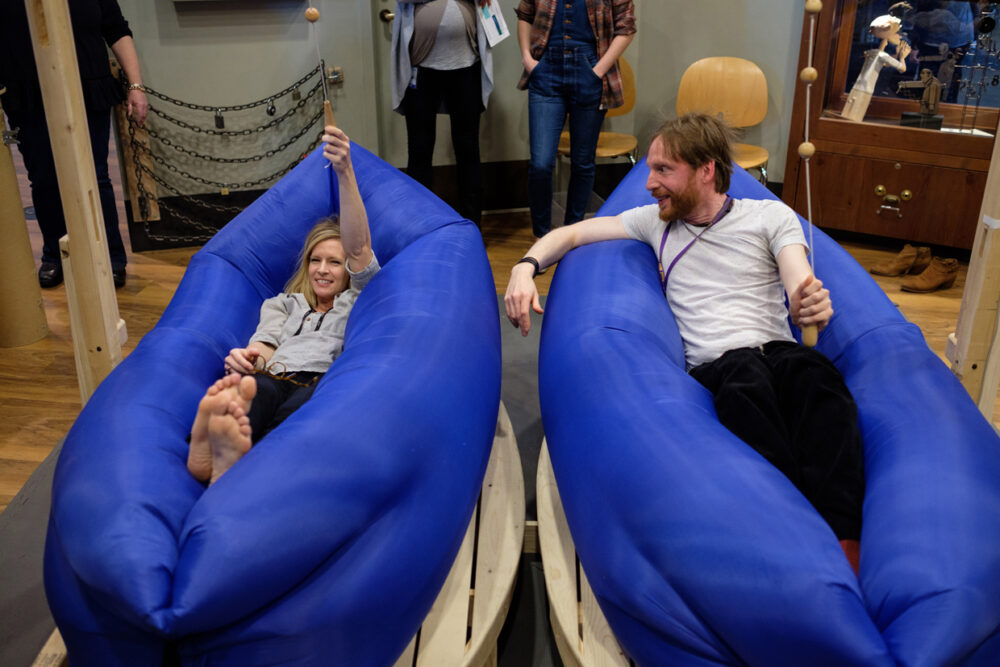 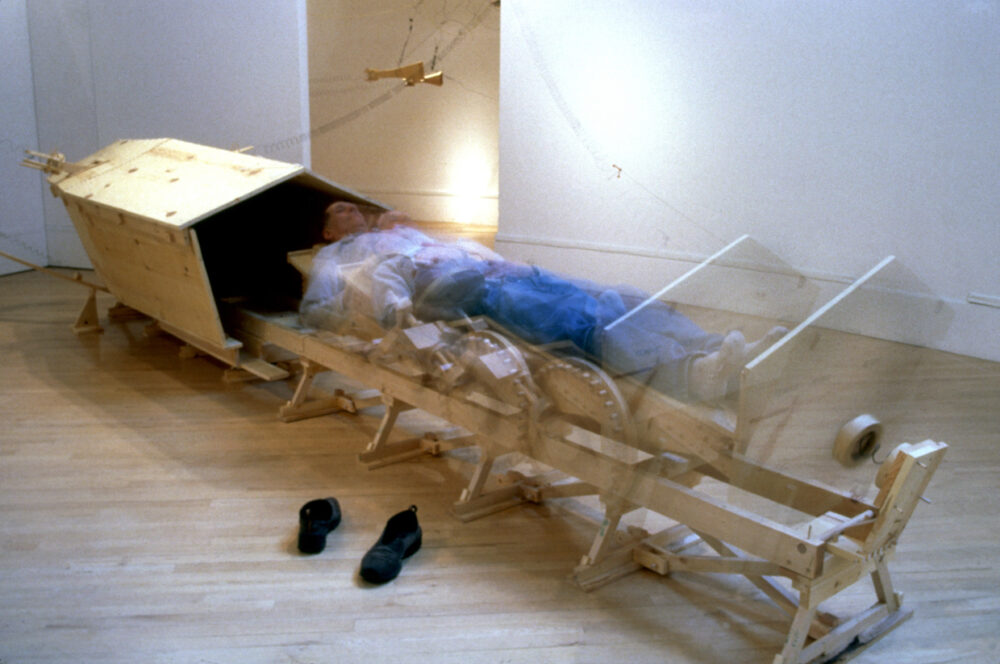