Angelina Gualdoni’s works on canvas take the patterns of interiors and abstraction as their main focus, locating the rhythm of the everyday sublime in the language of color field painting. Often staining both sides of the canvas, her paintings operate as fluid scrims and passageways between domestic and/as work spaces. Gualdoni’s paintings have been the subject of solo and group shows nationally and internationally at the Queens Museum, NY; St. Louis Art Museum, MO; the Museum of Contemporary Art, Chicago, IL; The Aldrich Museum, Connecticut; the Museum de Paviljoens, Netherlands; and the Neuberger Museum, Purchase, NY. Her work resides in the Saatchi Collection, as well as in the MCA, Chicago and the Nerman Museum, Kansas City. She has been the beneficiary of several grants and fellowships, including Pollock-Krasner, NYFA (2008, 2015), and she has attended residencies at MacDowell Colony, Skowhegan School of Painting and Sculpture, International Studio and Curatorial Program, and Chateau La Napoule. Gualdoni received her BFA from the Maryland Institute College of Art in Baltimore and her MFA from the University of Illinois in Chicago.

She resides and works in Brooklyn and is represented by Asya Geisberg Gallery in New York. Gualdoni is one of 10 organizers at an artist-run exhibition space Regina Rex, located in the Lower East Side of Manhattan.

A: You received the Artadia Award in 2001. Could you talk a little bit about what you were working on at that time?

AG: Figuring out how to survive as an artist out of grad school! That first year can be daunting. I had secured a studio and part time work assisting another artist, but wasn’t working as a teacher yet. My budget was extremely tight, so when I received the award letter from Artadia I was flabbergasted and overjoyed. The unrestricted award allowed me to pay off some credit card debt that I had racked up for school expenses and art supplies, and then bought me some time in the studio, where I was just starting to make the work that would eventually be at my first solo show at Kavi Gupta Gallery, Demo.

While this award would always be transformative, I think that coming at that particular moment was critical in demonstrating that there were support systems outside of the galleries that could help sustain a life in the arts, even at this early stage. 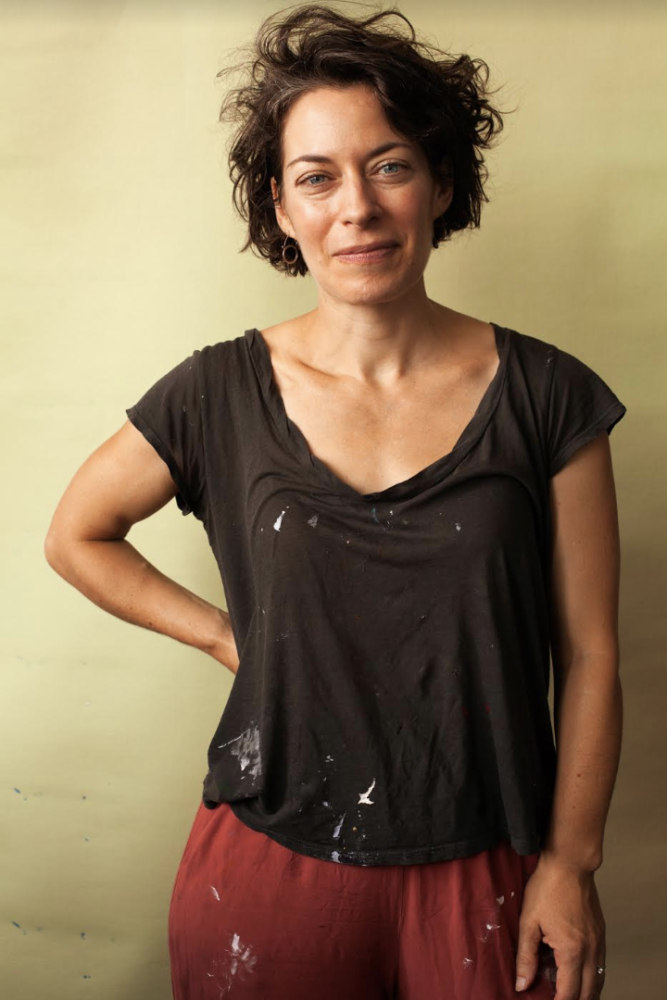 A: How has your work changed since receiving the award?

AG: My work has changed, as my subjects have shifted, but my formal interests have remained fairly consistent throughout my professional career. The dialectic of mimesis (representational languages) in tension with a poured and stained environment has been rich ground for me.

The architectural work that I made in Chicago, after Demo, reflected the modernist imprint on the city and the surrounding suburbs. I was situating what I saw as knock-off modernist buildings – dead malls mostly – as highly rendered, hard edged decaying structures that were actively disassembling themselves. It was entropy at its finest, perhaps some kind of expression of revenge on a site that was emblematic of so many of the problems with capitalism.

Upon moving to New York in 2005 I didn’t find that modernist architecture was as pervasive, and real estate wasn’t allowed to sit and fester in the same way as it does in the Midwest; the land is too valuable. At the same time, I felt like I had said all I needed to say about the death of modernist techno-utopias. From there, I embarked on abstraction for a few years, and eventually circled back around to architecture vis-à-vis interiors and still life after the birth of my daughter, Frances, in 2012.

A: Can you speak on the relationship between your practice/process – staining, dyeing, pouring and textile patterning – and the subject of domesticity, women’s labor and liminality in your work?

AG: In my most recent shows, Casa della Nuova Strega (2018) and Herbal Lore (2019), I connect remedy and ritual together, imagining a contemporary women’s domestic interior as a meeting point of popular science and mysticism, where anxiety and stress are sublimated into wellness culture practices. Using the painterly stain as a painting-cousin to textile dyeing processes, I united what were previously oppositional poles – the stain and geometry – into one element, a textile pattern that functioned as ground or wallpaper for the interiors. The specific patterns were inspired by female artists and designers of the 20th century – Stepanova Varvara, Lyubia Popova, and Sonia Delaunay.

These patterns linked a lot of my formal interests with a condition I am interested in: situations where women have redirected their ambitions due to economics, politics, or prohibitions on what they could not do otherwise. If you are Sonia Delaunay, and you want to support your husband as the primary artist in the family, you stop painting on canvas, and instead start producing amazing textile designs that are pretty much abstract paintings in their own right. If you’re Varvara, you want to make work “for the people,” so you leave painting for textile design. If you were a woman at the Bauhaus, and you couldn’t pursue painting, you pursued textiles. In herbalism, if you are a woman interested in medicine in the medieval era, you can’t go to university, but you can marry an apothecarist and work in the field by proxy. Or you can become a healer woman… or a witch. Or So this kind of pivoting, or multiple hat-wearing, I see a lot of that in women and design in the 20th century, and it’s these kinds of patterns that interested me.

In the studio currently, I’m thinking more about the psychological impact of magical thinking or placebo effect in relation to ritual and healing, so I’m back to using the pour in a more free and atmospheric way, to get to an exciting, or unpredictable feeling. It’s returning to a previous mode, and it’s been really gratifying to re-engage from a different angle.

A: Can you talk about the paintings you exhibited at Crystal Flowers last year?

AG: I was thrilled when Katherine Aungier and Allison Wade approached me about a show. Crystal Flowers NYC is a sometimes-salon and exhibition space in Allison’s apartment, which happens also to have been the salon of Florine Stettheimer and her sisters. I was familiar with Florine’s work because of the retrospective at the Jewish Museum, and had been interested in the liveliness in her paintings, as well as her whimsical selection of frames. Specifically, she had made an homage to Duchamp, and framed it with his initials running all the way around the canvas “MDMDMDMDMD”. This was what I was thinking about when I adorned one of my small paintings with some Old Man of the Woods mushrooms (Strobilomyces floccopus) that were laying around, dried to all hell in my studio. Ideally I would have had enough to make a whole border, but instead I positioned the few I had on top of the stretcher to visually link some of the linework on the painting, connecting it to the mushroom, and by extension to ecosystems outside the canvas.

That painting, Materia Terra, was part of a series that I am continuing for my next show, that posits herbalism as a nexus point of alchemy, medicine, ecofeminism, and magical thinking.

What excites me about this subject is that parts of herbalism are scientifically verified, and parts are untested, and parts are magical thinking, which deserves critique if it’s being peddled for profit (see: goop), but as a mode of imagination — this intrigues me. Painting is also a semi-truth, always reflective of the material world, and part of it, but a space of imagination and thinking though possibilities as well.

Other paintings I made for Herbal Lore were based on imagined interiors and talismanic or transformative objects a contemporary mystical/healing woman might have around her: flasks and stills, vitrines and snakes, moche figurine bongs, these kinds of things. I also used the smaller paintings as a means to imagine impossible hybrid plants, intended to cure what ails you – a peppercorn/ginkgo hybrid for circulatory and respiratory health, for example. My attitude is both sincere – I forage, and love learning about this kind of knowledge, but am skeptical of the way that these kinds of plants and materials feed into wellness culture, which has a tendency to isolate ideas of health solely in the individual body, and not in relation to greater communities and systems. 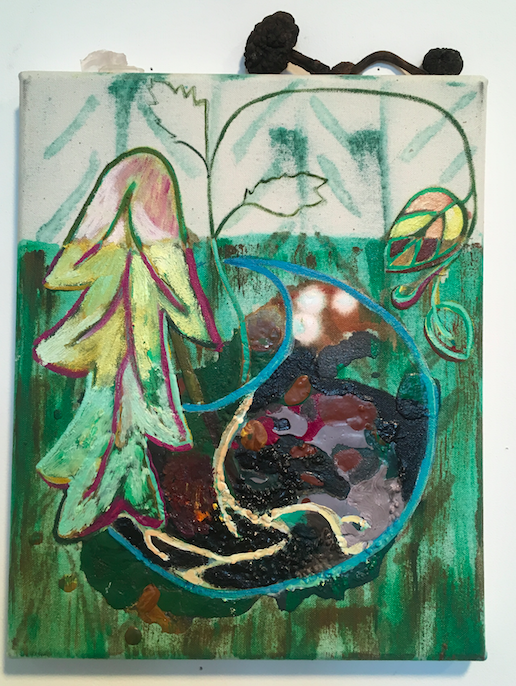 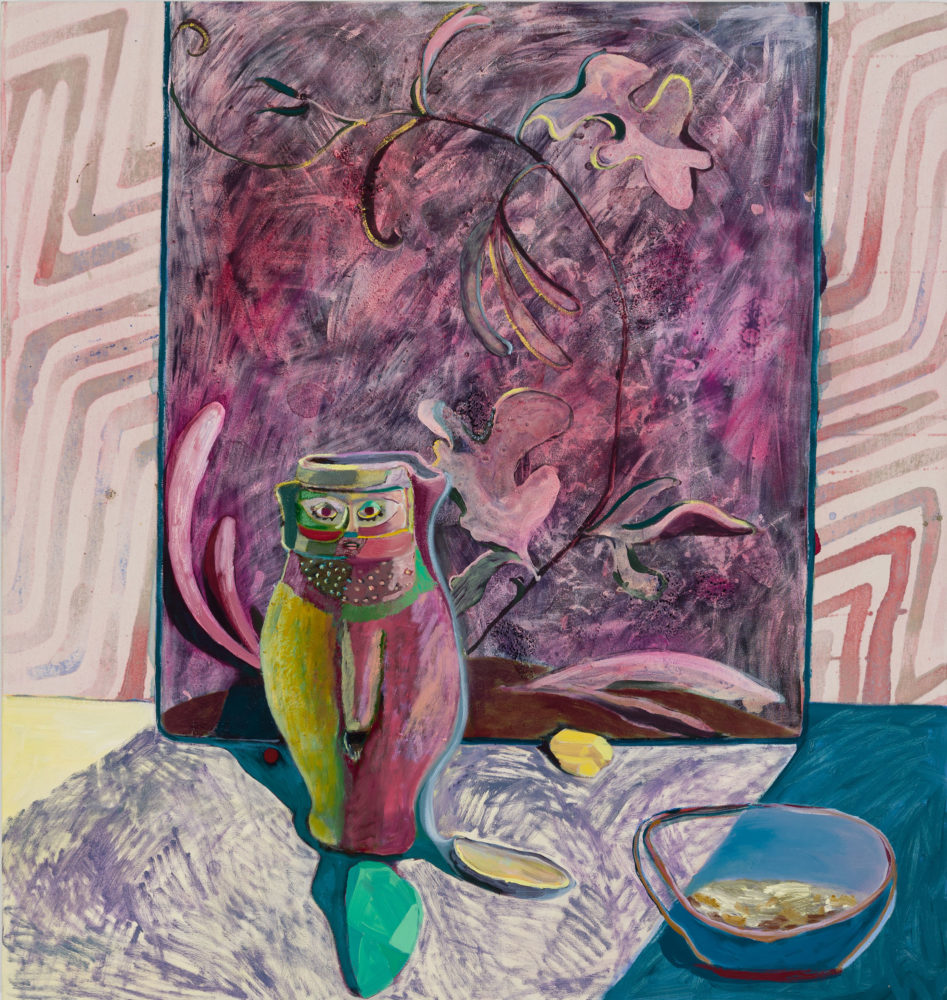 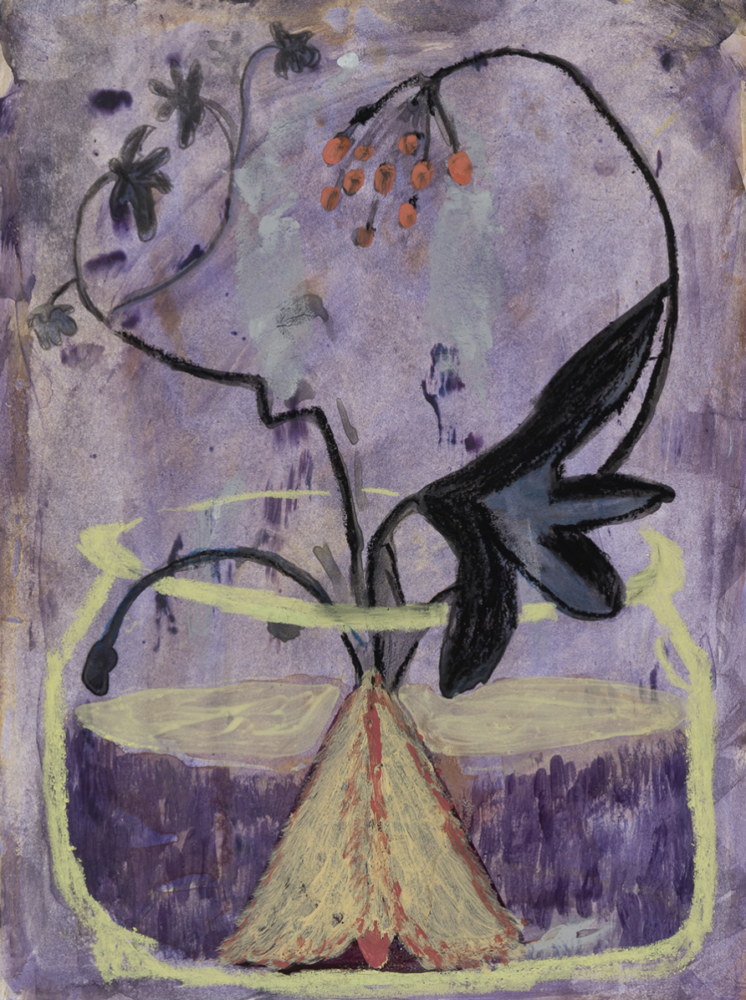 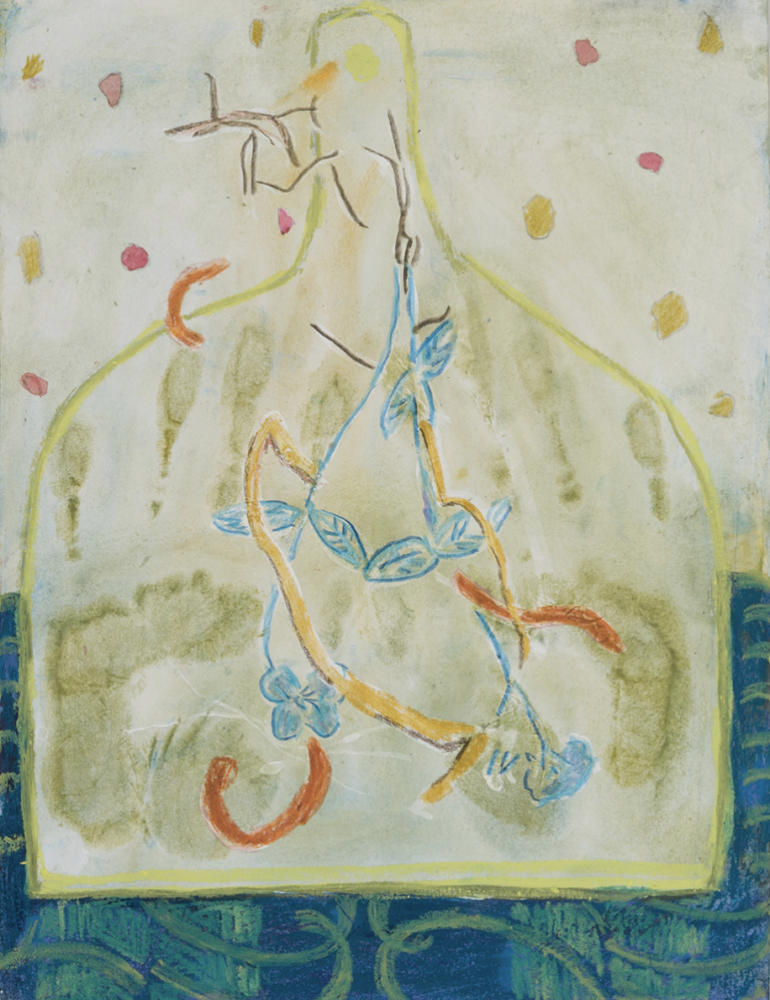 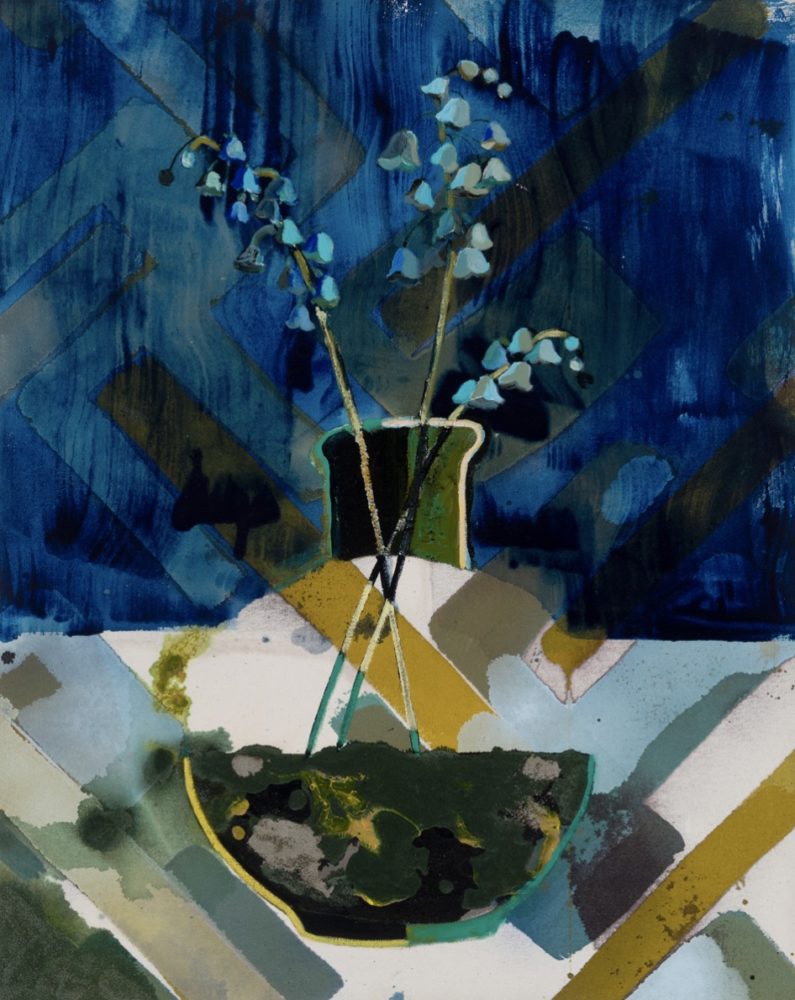 A: Your method of staining, dyeing, and pouring goes beyond treating the canvas as a mere surface. Can you speak about the influences behind your work?

AG: Multi-species ethnography, mycelium, root structures, the New York Mycological Society, ecofeminism, permaculture. My incredible crit group (shout out to Hearts Gymnasts!), my peers at SMFA@Tufts, all my ladies, my extended family and my husband and daughter, whose love, patience and support make doing the work possible.

A: Are you working on any specific projects right now? And Where do you envision your work going from here?

AG: Last year I received the Daynard Travel Grant from my school, SMFA@Tufts, which enabled me to do research on botanical imagery in herbals and frescoes in Rome, Pompeii, Naples and Bologna. While there I also visited early physic gardens, like the Giardini della Minerva in Salerno, and the Museo Aboca in Sansepolcro, which is devoted to the history of herbal medicine.

Witnessing these plants in their contemporary habitats, as well as in domestic settings in frescoes in Pompeii, in museums, and in herbals, it became really clear the way that the sense of place or terroir could function across material, symbolic, and medicinal modes simultaneously. It was incredibly inspiring!

It’s easy to connect these elements in a landscape that has an agrarian background and a preserved history – but I’m wondering what the same nexus might look like for a present day American landscape, full of gouges and dumping. So when I’m working on paintings for my upcoming show, The Physic Garden, I’m thinking about a contemporary ecosystem, that is polyglot and inclusive in terms of plant-human-animal-fungi relationships, but also meting out how to survive in a degraded landscape. The actual imagery is very much aligned with the work in Herbal Lore and Casa Della Nuova Strega, but more influenced, perhaps, by the line work in a lot of the medieval drawings and prints that I’m looking at, as well as efforts to look at these relationships from multiple points of view.

When I started foraging mushrooms, it was a form of therapy – coping with job stress, and kind of as a lark, or food for the pot. As I’ve gotten more experienced, It’s been really exciting and gratifying to see how this has shaped my art, my (still developing) understanding of ecology, and underscored the importance of communal climate activism. 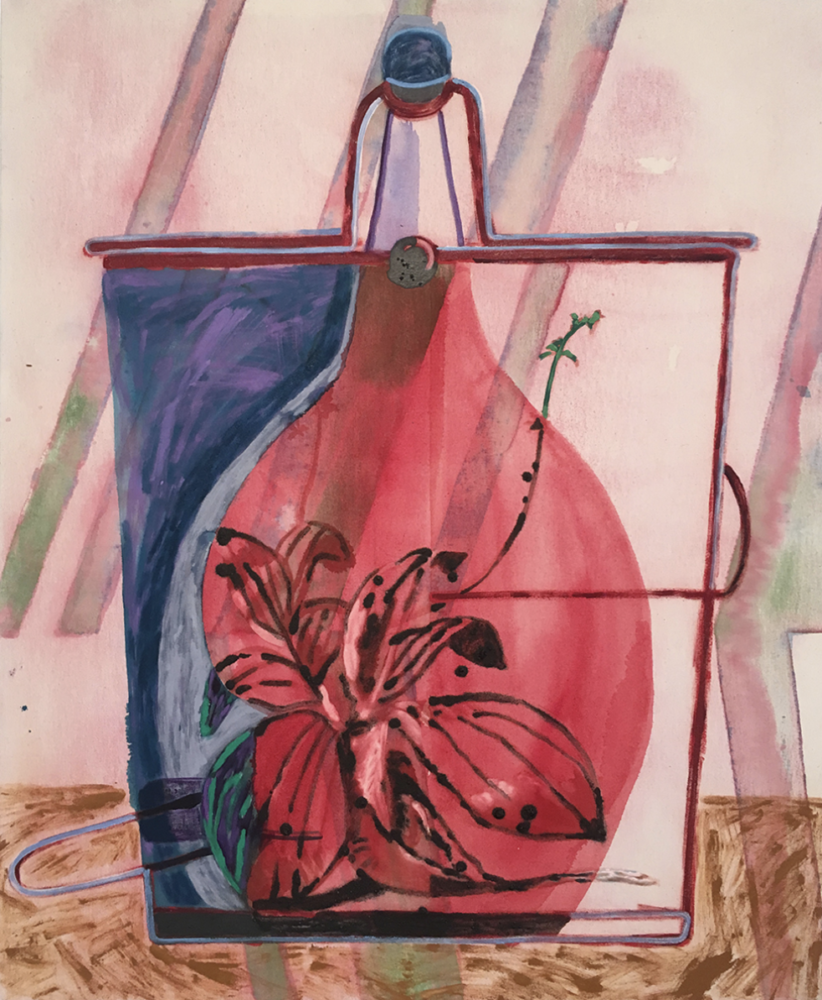 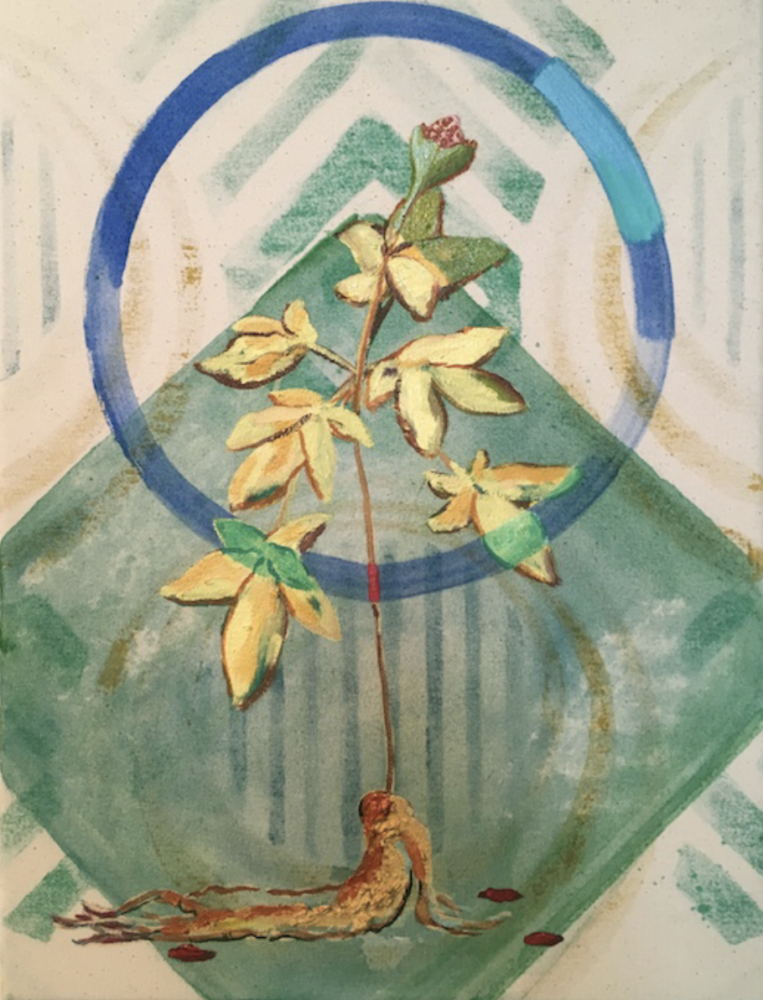