Caleb Cole is a Midwest-born, Boston-based artist whose work addresses the opportunities and difficulties of queer belonging, and aims to be a link in creating that tradition, no matter how fragile, ephemeral or impossible its connections are. Using methods such as collage, assemblage, photography, and video, they bring images and objects together for chance encounters, deliberately placing materials from different time periods into conversation with one another to think about a lineage of queer culture while resisting a singular progressive genealogy.

Cole is the recipient of the 2009 Boston Artadia Award, Hearst 8×10 Biennial Award, 3 Magenta Flash Forward Foundation Fellowships, and 2 Photolucida Critical Mass Finalist Awards, among other distinctions. Their work is in various permanent collections, including the Museum of Fine Arts Boston, Museum of Fine Arts Houston, Virginia Museum of Fine Arts, Newport Art Museum, and Leslie Lohman Museum of Art. They teach at Boston College and Clark University and are represented by Gallery Kayafas, Boston.

Artadia: You received the Artadia Award in 2009. What was receiving the award like at the time, and how has it continued to affect your artistic practice?

Cole: Winning the Artadia grant was one of the first big things that came my way after I graduated from photo school. As a way to get my work out into the world, my friend and I challenged each other to enter in 50 calls for entry (the “loser” to buy the other a round of drinks). Artadia was one of the open calls we both entered, partly because of its accessibility. Grant entry fees add up when trying to get your work out there. It was an amazing opportunity to not just submit without a fee but to talk with curators about your work and get some direct feedback and evaluation. Typically, you send your work out into the world, and that’s it.

What’s been really amazing about the award is the doors it opens – as in the respect, the prestige, and what is afforded to you by having that – it acts as a reference point. Being an Artadia Awardee has allowed me to connect with other artists and to this larger network. It is the only ongoing, sustaining thing that I’ve won. Usually, they’re like, “here, have this thing, go live your life!” All of the workshops and events are geared towards creating connections and sustaining community.

Artadia: How would you describe Boston’s arts community? What was it like when you first came versus now, having lived there for over ten years?

Cole: Boston felt so big when I first got here. I was apprehensive at first that there would be too much constant change with all the universities – you wonder if people will constantly be leaving or turning over. Boston is big enough that you’ve never seen everything, but it’s small enough that you can get to know people. I’ve found there is a longevity to the relationships I’ve made here.

There is an expanse of different pockets of things happening in the greater Boston area.  So many great local initiatives make it possible to have all sorts of experiences with art. The art scene is expansive beyond institutions, of which Boston has many. There is drag, burlesque, circus, and music – the arts scene is super diverse.

Artadia: Could you speak a little about what you were working on when you won the award?

Cole: I was working on “Other People’s Clothes,” a photographic, performance-based series. I found clothes in thrift stores, on the street, or sometimes out of people’s closets. I would imagine a character and a space for that person to experience a moment alone. I would step into that character, fill those clothes, and photograph myself.

Artadia: What was the significance of putting your body into those characters rather than someone else’s?

Cole: There’s the practical response which is – I’m available anytime I want to work, I know exactly what I want, I won’t complain, and I’m free. The actual response is specific to my body and gender at the time I created the series. There’s something about seeing the same person repeatedly in various scenarios, where they act almost like a mannequin. Their particular characteristics melt away and you can concentrate on gestures, setting, clothing, et cetera.

You know the way that you sometimes figure out who you are by reflecting onto someone else? Whenever you meet someone, you think, “Am I like them? Am I not like them? Do I fit in here? Do I belong here?” In some ways, I was constructing those sorts of reference points for myself. I was thinking about ways to understand myself by creating other people to compare to or have a sort of dialogue with. 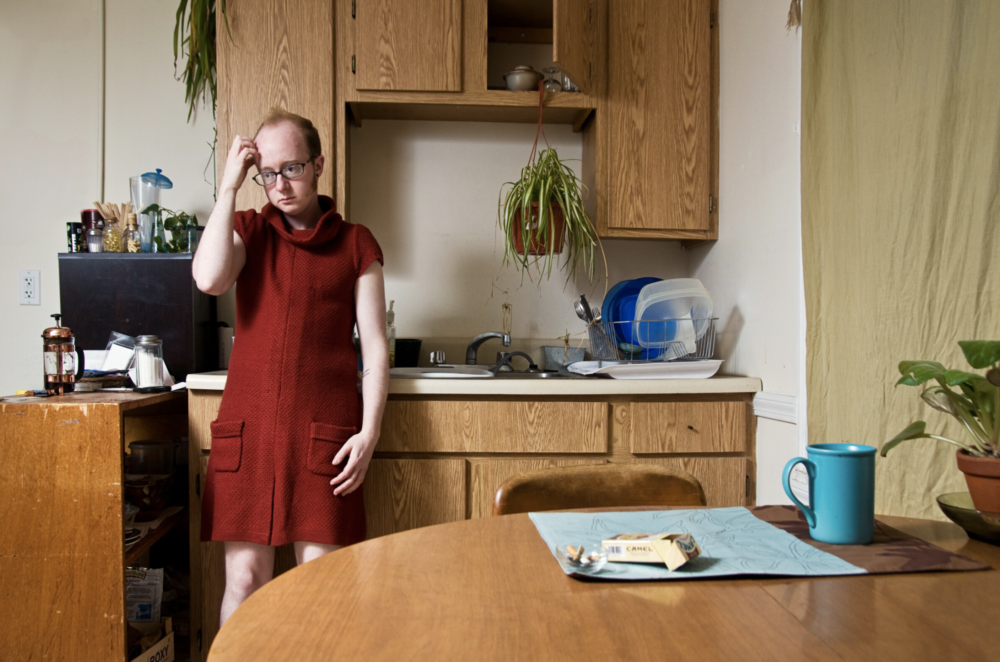 "Coffee and Cigarettes," 2008, from the series "Other People's Clothes," archival pigment print 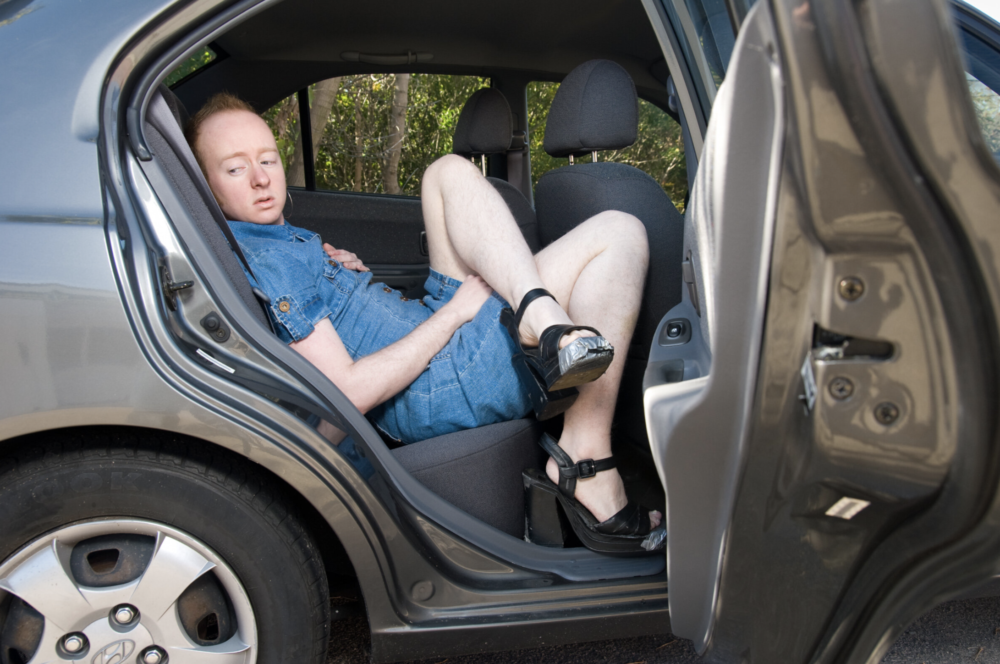 "Girl in the Back Seat", 2007, from the series "Other People's Clothes," archival pigment print 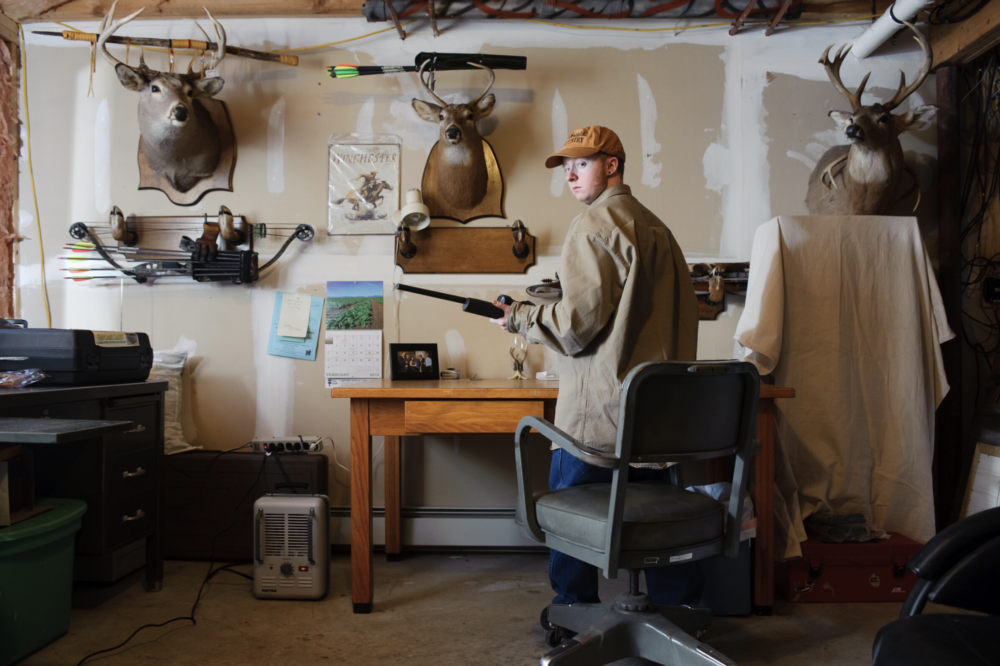 "The Hunter," 2010, from the series "Other People's Clothes," archival pigment print

Artadia: “Traces” is a body of work that explores the presence of the subject. These collages take place in various interiors, the common factor being that the figure within the image has been rendered invisible.  Can you elaborate on your interest in portraying an imperceptible body?

Cole: Across my work, I’m concerned with the unknowns of queer history. I think a lot about the legacies of losses related to AIDS. I’m obsessed with removals, absence, and presence. This translates into “Traces” as I removed figures from magazines during the 80s and 90s, right at the beginning of the AIDS crisis.

Artadia: How would you explain the transition you made between a body of work like “Other People’s Clothes,” where the character is evident, to one where the subject is abstracted as it is in “Traces”?

Cole: After “Other People’s Clothes,” there was a demand for me to produce myself and my body. There’s a lot of demand for artists from marginalized groups to perform their identity and make that accessible to audiences. While people wanted more of my transness, I thought there was something powerful in that refusal, saying, “maybe I don’t want to keep making myself available to you.” 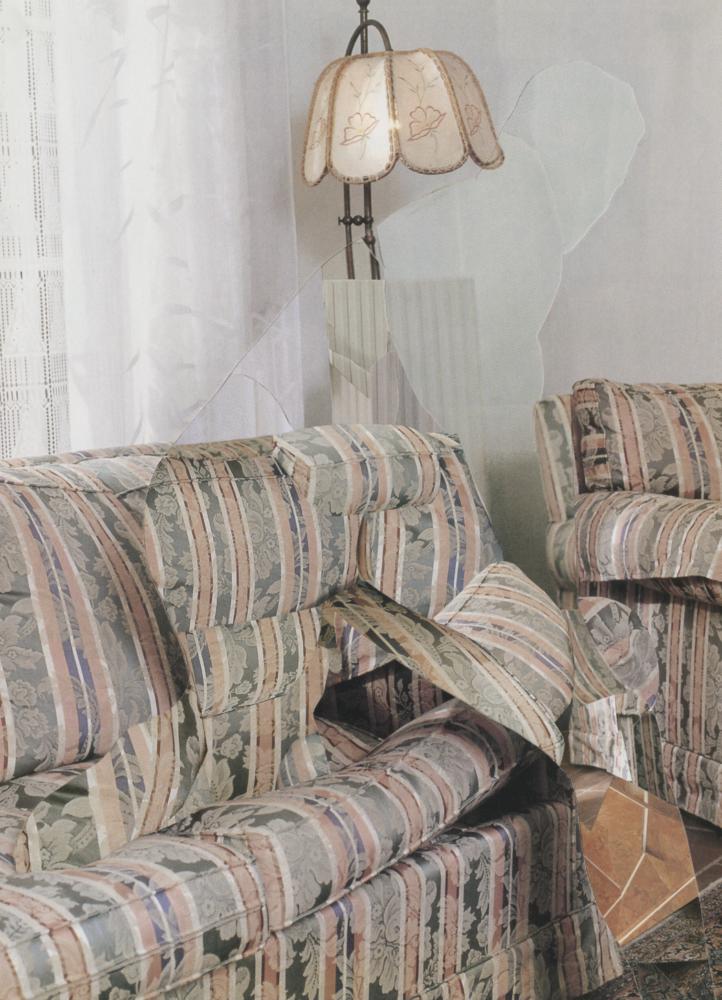 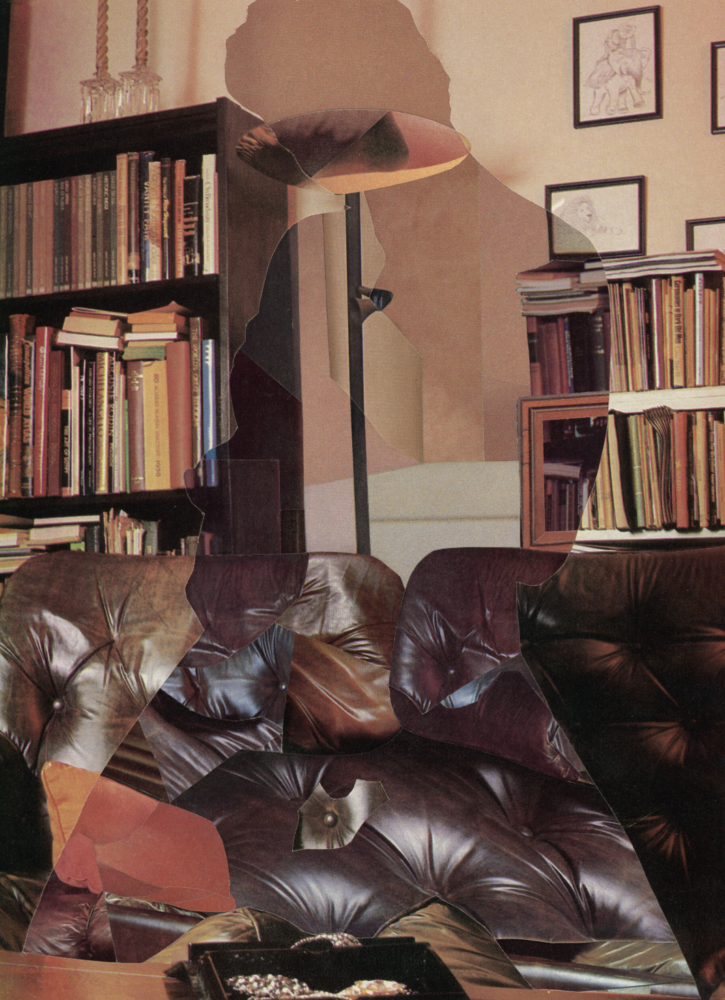 Artadia: Queer history and legacy exist partly due to those who made themselves visible – either in being overtly queer or hinting towards a sort of queerness. Rather than dealing with known subjects, much of your work concerns figures who are anonymous. What is the purpose of using subjects whose queerness is ambiguous?

Cole: Objects in archives are already known and being cared for. I am inspired by finding, collecting, and caring for objects that have yet to be cared for or have been discarded. Working with found materials, where you’re not tethered to what’s already known or recorded, allows for more room and space to explore and think about other possibilities.

A queer reading of things doesn’t have to be capital G gay. There’s space for all sorts of folx. In earlier works, lots of folx were finding ways to connect with the works whether they were queer-identified or not. Everyone has a moment when you are figuring out, “how do I negotiate my role in this group or this space?”

There’s also something really powerful in the ways that imagination and fantasy can allow us to feel more connected to a group. There’s something in imagining and exploring that can strengthen our attachment to a group, even if it’s people you do not know. That sort of messiness, lack of answers, and constantly shifting possibilities is really exciting to me. It makes me think about connections across time, about queer lineage and possible queer futures.

Artadia: What is your process of sourcing and choosing images like? Is the process of finding materials driving your work, or are you conceptually driven and then finding those specific objects or images? 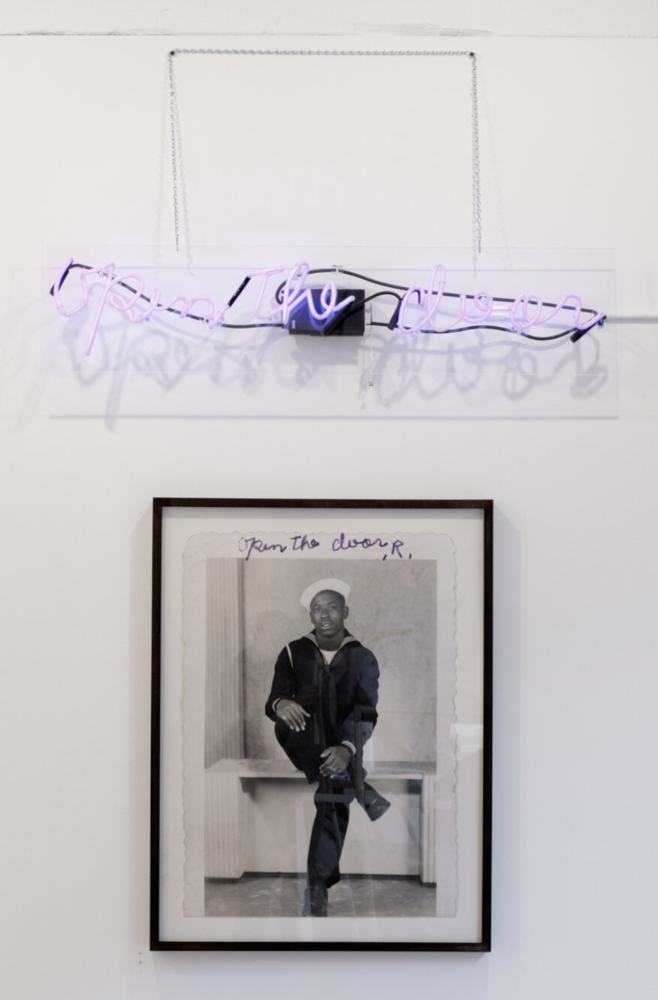 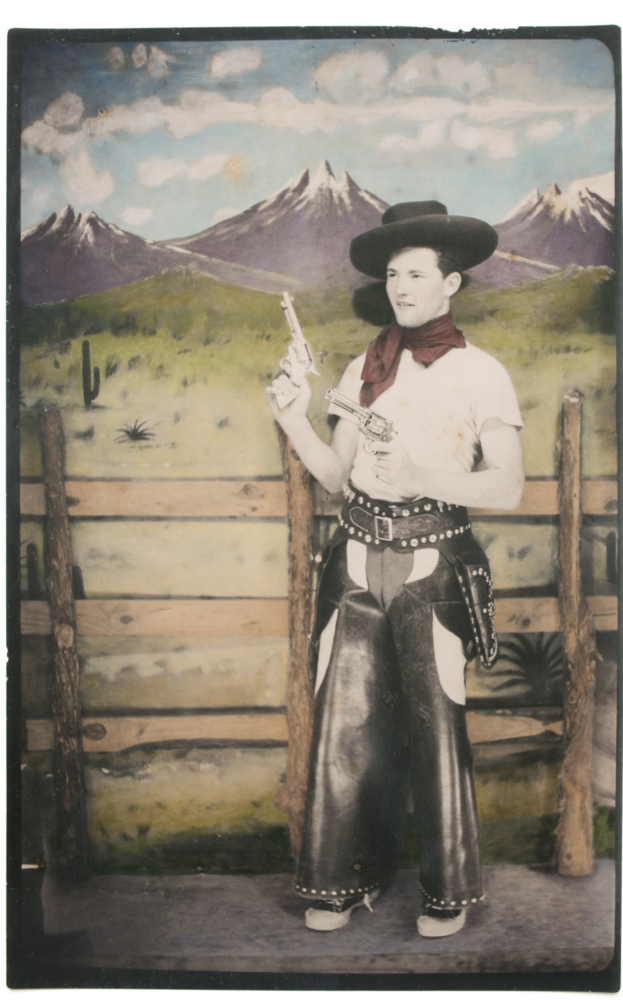 Artadia: “Beyond the Here and Now” is made up of found photographs and sourced imagery which you then collage, alter, or superimpose. Can you tell us about this series?

Cole: The work I had done previously was claiming any image as a potentially queer image. I was taking images, no matter where they were sourced, and placing them inside a queer worldview. I started collecting photos from gay pride parades and queer-specific events. It then expanded into collecting snapshots from the 80s and 90s and modifying those. Not all the images are directly from queer events, but they started there as a way to think about records of queer history. If objects are all we have to glean from in terms of queer history, are they enough?

Then I thought, what happens if I bring different points of time together? Maybe you can’t contain ideas about queerness in a single frame – it requires multiples. I think that’s why I’ve moved from “Other People’s Clothes” into a more collage-based practice. I’m really excited about the way of taking something that has a meaning in and of itself and bringing it together with something else that complicates its meaning. It can become a messy meaning that is the stuff of queerness – this thing you can’t quite pin down in its multiplicity.

Artadia: What are you working on now?

Cole: I recently inherited collage materials from John O’Reilly, a collage artist and photographer who passed away last year. I was given many of his scraps, magazines, and books. My current work uses his materials in an attempt to converse with him across time and death. It allows us to have this conversation about his influence on me as an artist and how queerness and queer identity have changed over time. He passed away at 91, and although we had a very different life experience, these are things I’m thinking about through his materials.

John O’Reilly decided to live in Worcester for most of his life. He wanted to live somewhere inexpensive so that he could continue to make his work. My current work with his materials is also about this local connection. His staying in Massachusetts and not moving to New York is something I’m working on now too – do I continue to stay here? There’s so much to love, but it’s so difficult. Do you move or do you stay? 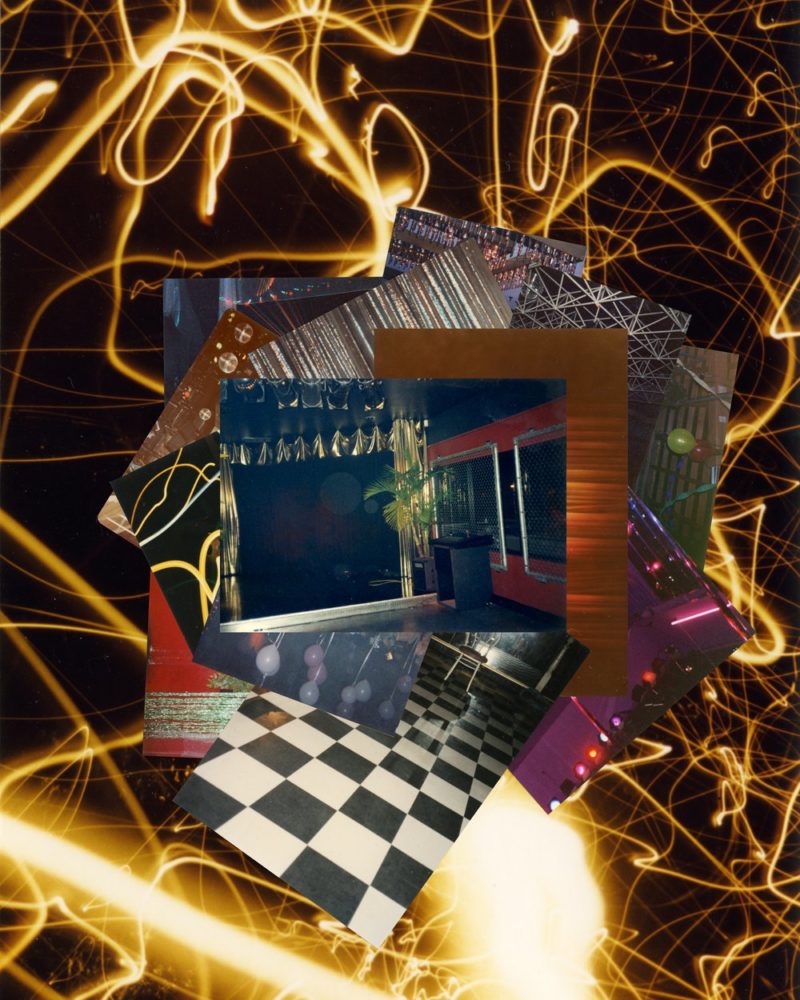 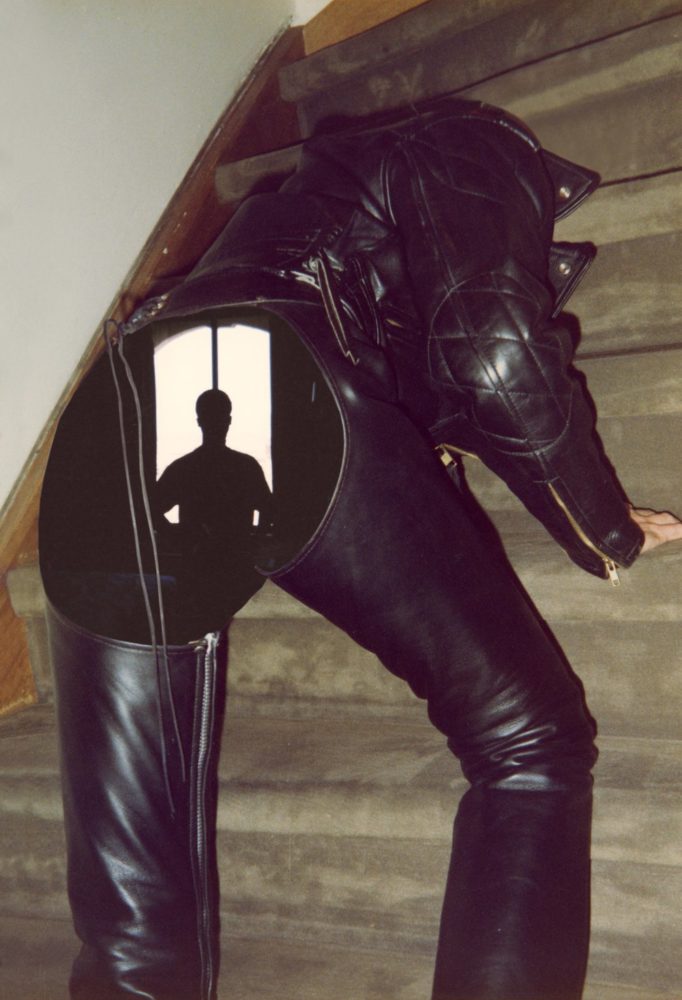 To see more of Cole’s work, visit their website and Artadia’s Artist Registry.

Biography and images are courtesy of the artist.