Jackie Saccoccio (b. 1963) received the NADA Artadia Award in 2015. She currently lives and works in Connecticut and New York, and attended School of the Art Institute of Chicago (MFA) and Rhode Island School of Design (BFA). She has exhibited nationally and abroad for the last 20 years. Her work is included in the collections of the Metropolitan Museum of Art, NY; Rose Art Museum, MA; Museum of Contemporary Art, Chicago, IL; Nerman Museum, KS; and Addison Gallery of American Art, MA, among others.

Jackie joins Artadia for a brief discussion about her work. Her solo exhibition Tennis Elbow, opens this Saturday at noon and will be on view at The Journal October 5-11. Saccoccio will be exhibited at Art021 Shanghai with The Club Tokyo in November. Saccoccio will have a double-venue exhibition at Van Doren Waxter and CHART Gallery entitled Femme Brut opening January 23 and on view until March 21, 2020.

A: You received the Artadia Award in 2015. Could you speak a little bit about what you were working on at that time?

JS: Cosmic Baroque, 2015, was the work that was recognized by Artadia at 11R’s booth at NADA that year for the award. It was part of an ongoing series of large-scale abstract works called Portraits & Profiles. I received the phone call from Artadia notifying me of the award minutes after being dealt a grave health diagnosis. It was a difficult conversation to get through, but a moment I won’t forget. It was a period of triage for my family and I, and the importance of the grant didn’t immediately hit me. In the coming months Artadia’s faith in my potential served as a life raft to keep working. It helped immensely to feel a vital part of the art community when I was dealing with personal issues and served as a reminder to keep fighting to have one’s voice heard, whatever the hurdle.

A: Can you talk a little about your newest body of work to be exhibited at The Journal in October?

JS: Sure, the quartet of paintings that I’ll exhibit at The Journal were chosen/made specifically for their new Tribeca space. There’s something about the distance of the walls to one another in the gallery that made me want to have works that bounced off one another in an antagonistic manner, like being in a dressing room and trying to catch your reflected reflection when there are opposing mirrors.

These paintings are loosely part of the Femme Brut series that will be shown over the next few months. The impetus behind the work is the tumultuous, writhing uncertainty of things; our climate, our rights, of this seriously screwed up world around us. I look to Shakespeare’s The Tempest for some levity to this apocalyptic vision. The paintings contain heaving orbicular centers to which I’m layering with outlines of inverted boxes, warped, fictitious architectural implications, in hopes of presenting a phoenix, a nonsense stage for a floating chrysalis.

I begin the paintings on unstretched canvas by pouring loose paint and manipulating the canvas and gravity to create webs of space, dripping and scraping one painting over another. In the newest works, the results of monotype technique (one painting serves as plate, and the other canvas as paper to accept the imprint) add another layer. I think all these layers add a dimension of distance, although not in a pictorial perspectival sense.  It reflects time through a conversation between the layers that includes atomized color, painted and drawn, dripped, perspectival views of pixelation and printmaking. The process accentuates the alchemical play that occurs between the mediums of the individual colors, and, I hope, reflects the conceptual nature of the paintings, sweeping through vertiginous vacuums and implosions and the explosive nature of a tempest. 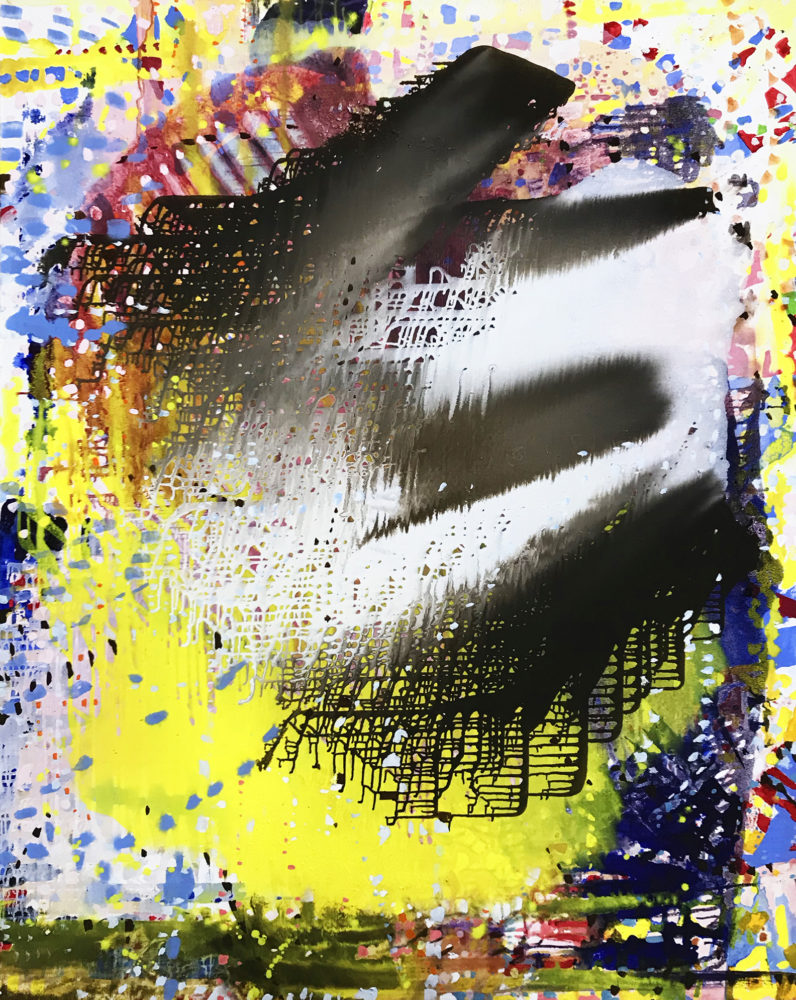 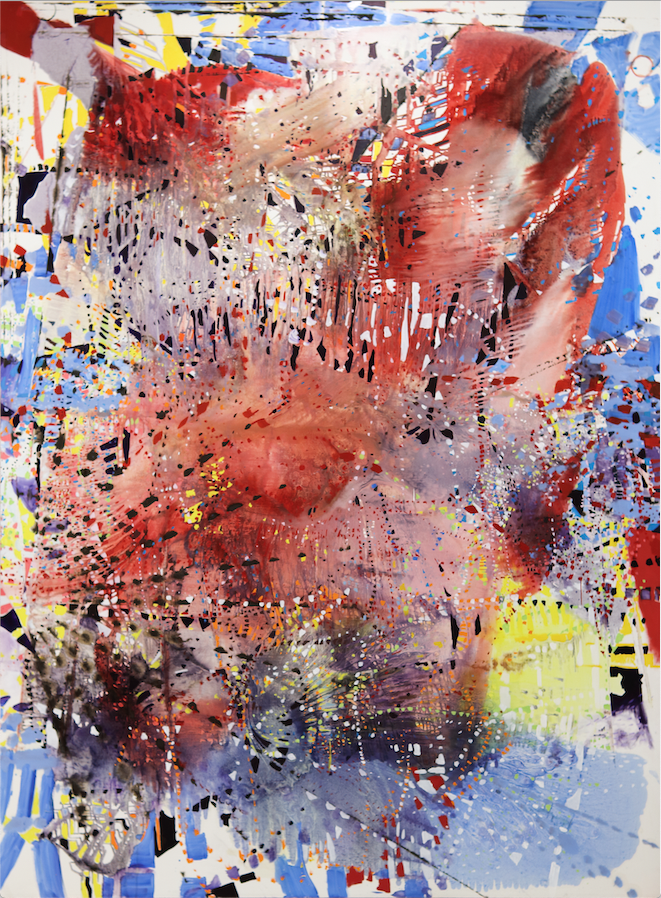 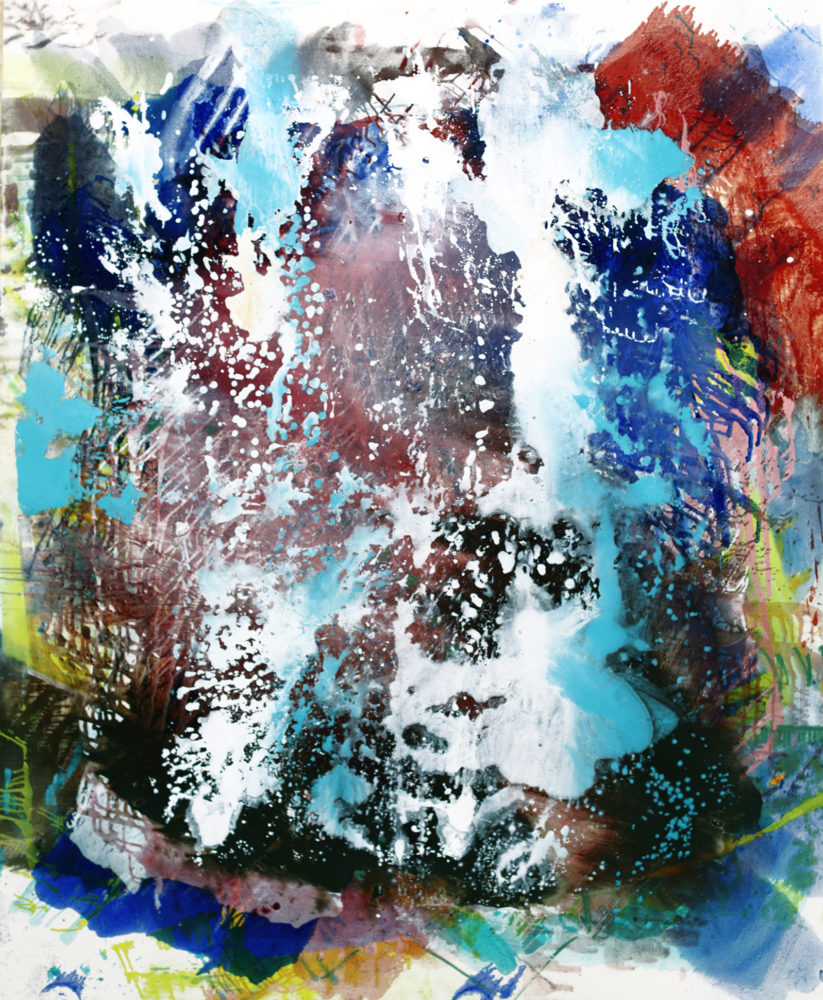 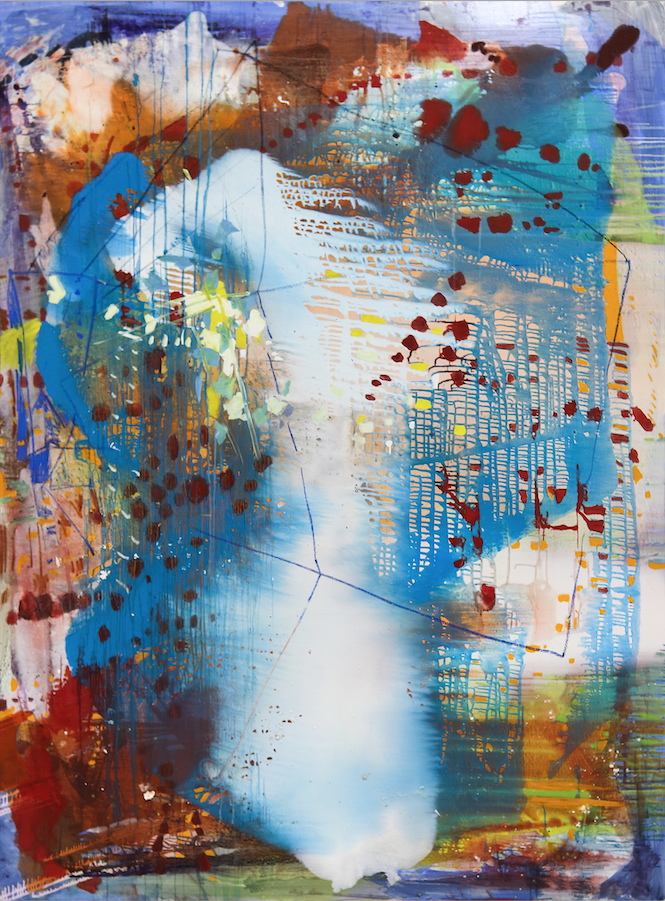 A: In the past you’ve mentioned your work has been abstract since the 1990s, but around 2008 you became interested in the idea of portraiture – is this still something you’re interested in exploring?

JS: In 2011 I began a series titled Portraits and Profiles. These were large abstract works, each a portrait of a canonical painting or film, spanning from Ghirlandaio to Joan Mitchell to Wong Kar-Wei, that are meaningful to me. They were based on notes I’ve accumulated over the years, mostly observations concerning formal tactics the artists made to convey specific concerns.

A: Can you talk about how your work has changed since 2015?

JS: The Portraits and Profiles of 2011-2015 morphed to include portraits of places and more autobiographical experiences, as in Apocalypse Confetti, 2017, a response to the 2016 election, and currently into the Femme Brut paintings, which emphasize the physical and performative nature of painting through a female lens.

A: Are there any artists or art exhibitions that have resonated with you lately or have been of particular interest?

JS: A lot recently. I feel like curators and artists have really upped their game, like everyone got the memo that art is critical to our collective cultural well-being, present and future, and we better make it count. There isn’t a lot of complacency.  My favorite of last season in NY, Infinite Intimate at Lévy Gorvy. Profound complication uniquely and beautifully orchestrated in each piece. The Debuffet collages, a handful of Robert Ryan minis, Lee Bontecou — sends shivers down my spine just thinking about them.  Other highlights, pioneer Hilma af Klint at the Guggenheim, Jack Whitten at the Met Breuer and Nina Chanel Abney’s knockout show at Jack Shainman. It already looks like an exciting season with Bernard Frize, Shana Mac Andrews, Amy Sherald, Ridley Howard, Xylor Jane, Diana Cooper, Sarah Sze and Loie Hollowell just this month. 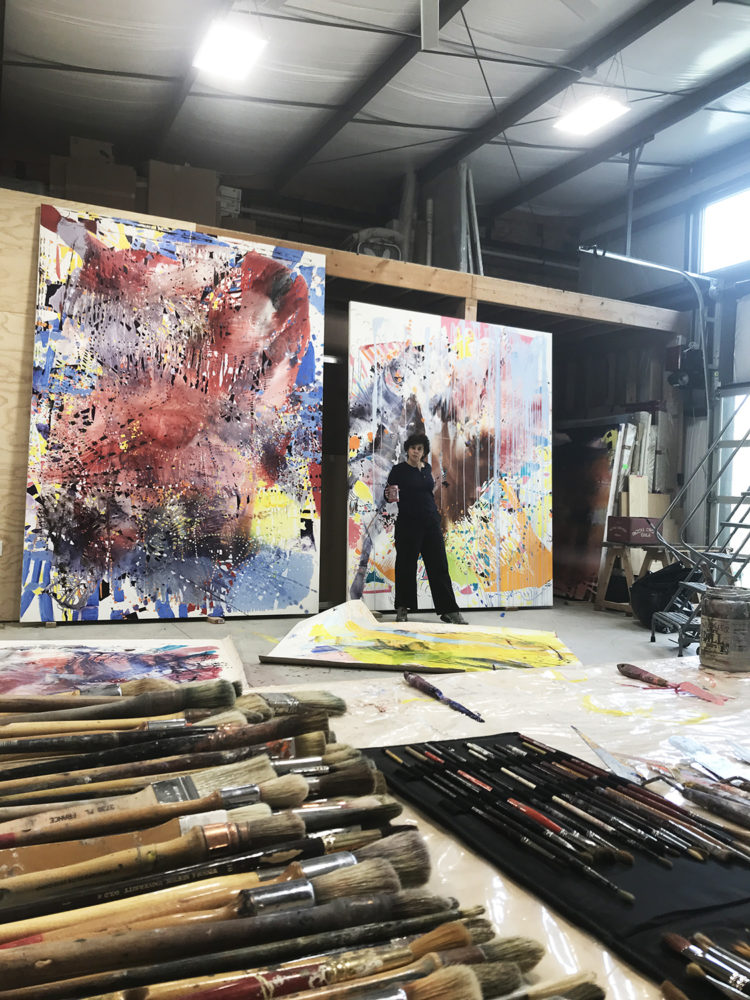 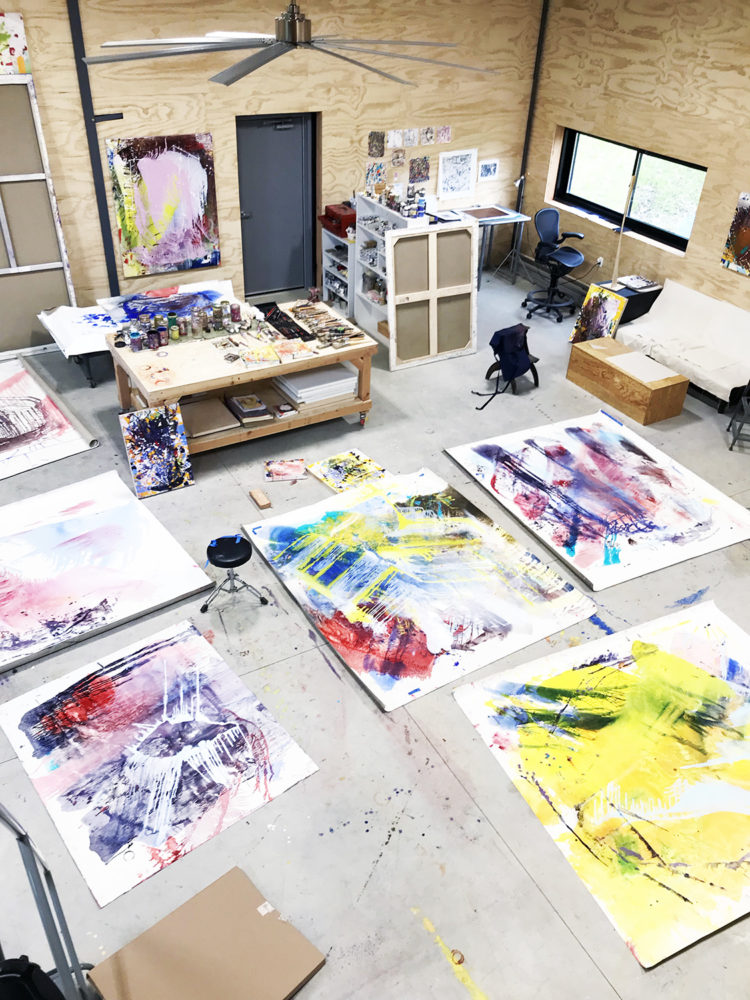 To see more of Jackie’s work, visit her website and Artadia’s Artist Registry.

Jackie’s biography and all images courtesy of the artist and Van Doren Waxter.